Legendary Glock pistol, pump action shotgun, semi-automatic M4 riﬂe, unbeatable MP5 and smell of gunpowder in the air with professional guidance – everything what you need for an extreme day to remember!

All exercises will be led by a skilled marksman, so you will not only experience what is like to ﬁre a real weapon, learn all the safety rules, but at the same time understand the ways how to be much more accurate.

Activity is held in a professional indoor shooting range, close to Kaunas city centre, while experiencing 4 different weapons and plenty of rounds.

Of course, to everyone who will want to exercise a bit longer – you will be able to purchase additional ammunition on the spot.

More about the weapons:

Glock
The pistol appeared back in 1983, in Austria. Structures use shock-resistant and weather-resistant polymers. All Glock guns have a double acting system, with a hexagonal barrel. Due to the design features: reliability (practically free, underwater), low weight (shock resistant polymers), power and compactness (capacity, precision, weight and size), and comfort (no sharper exterior details, fuse, trigger, no clothes etc.) the weapon was liked by both power structures and civilians. So why not take the time to try this “eternal” weapon?

M4
The M4 carbine is extensively used by the United States Armed Forces and is largely replacing the M16 rifle in United States Army and United States Marine Corps combat units as the primary infantry weapon and service rifle. As being No. 1 weapon for majority of Allied forces all around the world, you have a possibility to feel what is like to hold it in your hand and understand why it’s matched only by Russian AK-47 rifles.

Winchester
The legendary Winchester was created in the USA back at 1897. During the last century, it has been updated and improved couple of times, but the classic “pump” action is still here! To feel the power of 12 caliber ammunition, to test the effectiveness of “pump” principle is nothing better than a Winchester pump action shotgun!

MP5
The MP5 is one of the most widely used submachine guns in the world, having been adopted by 40 nations and numerous military, law enforcement, intelligence, and security organisations. It is widely used by SWAT teams in North America. If you have ever played any modern games and always wanted to feel, what is like to be a in SWAT or similar forces, then it’s best possibility to do it here

Everyone during our activities can buy souvenir gas mask from old military reserves! If you want to have more then one, please give as a message and we will bring them to the departure point.

If you feel that provided quantity of rounds is not enough – not a problem! Just take additional amount and we will provide double, what is promised in the initial package. 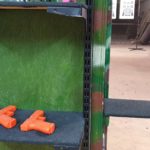 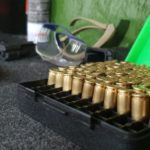 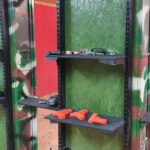